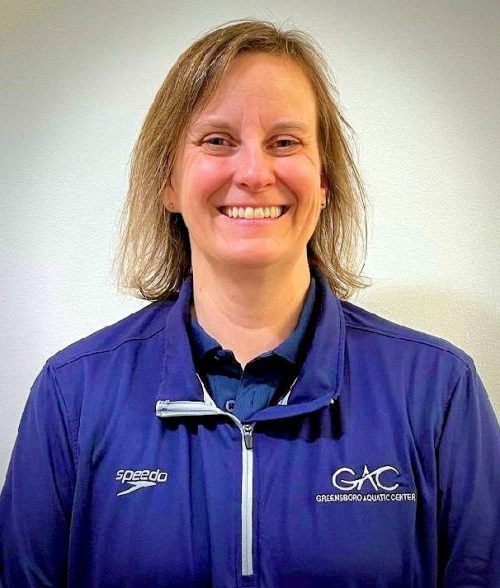 Nanette Stevens serves as the Competitive Coordinator for the Greensboro Aquatic Center.  Her main responsibility is assigning lane space in the three pools and dive well for teams, organizations, and public use during operating hours.  She oversees regular meets and competitions that utilize the GAC and assists with major events.  Nan joined the GAC in January 2020 as a part-time meet technician.  She transitioned to her current role in March 2021.

Nan has been part of the swimming community as a parent and volunteer since her daughters joined their first swim team in the summer of 2009.  She became an Administrative Official in 2015 and was one of the first three officials in North Carolina Swimming to complete the N2 AO National Certification when this was instituted in 2017.

Prior to joining the GAC, Nan was a stay-at-home mom.  She volunteered extensively for her daughters’ swim teams and schools.  She has been active in the PTSA at both the elementary and high school level, serving as PTSA President at both Brooks Global Studies and The Early College at Guilford.

Nan is a native of Jacksonville, Florida.  She graduated from Jacksonville University in 1993 with a B.S. in Mathematics and Chemistry and a minor in Music.  She came to North Carolina for graduate school, earning a Ph.D. in Analytical Chemistry from Duke University in 1997.  She was a post-doctoral associate for two years at Virginia Tech working in the research laboratories at R.J. Reynolds in Winston-Salem, NC.  She became a Visiting Assistant Professor of Chemistry at Wake Forest University in 1999.  In 2003, she left Wake Forest to spend more time with her daughters and was able to work from home for several publishers writing ancillary materials (solutions manuals, study guides, and algorithmic test and quiz databanks) that accompany college chemistry textbooks.